Lucia wrote: “I love my career and the places it allows me to explore…Jalal drove us the four hours south from Amman to Petra. On the way down, modern buildings mix with Bedouin tents, goats and sheep with herders. Our mid-level hotel, the Amra Palace, offered a bland buffet dinner to run from, but we had a great bed for serious sleeping and an old-fashioned bathroom.

Next morning: “At long, long, last to Petra, and to cast eyes on the iconic Treasury…Petra is so beautiful with the twisted, flaming sandstone, the high walls of the natural water-cut siq, and the encarved temples, palaces and tombs of the Nabateans.” 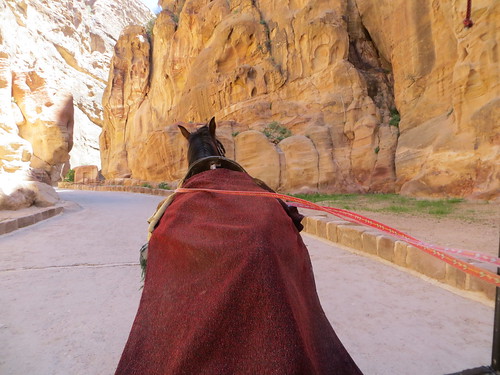 We caught the hotel’s free 8 AM shuttle bus to the entrance, where we purchased our two-day tickets for 55 dinars each ($77.67 US). We noted a sign saying Israelis have to pay 90 dinars for a one-day pass. Our driver speculated it’s because Israelis are so tight with money, they pack their own lunches and choose to spend no tourist dollars in Jordan.” This struck us as an anti-Semitic stereotype. Indeed later we learned that the Israeli tourism business was understandably offering to bring travelers economically to Petra for the day and returning to Israel at night. The hard-bitten Jordanian tourism industry, which suffers dramatically when there is violence in Israel or regional turmoil, understandably lobbied for a change in Petra’s ticket price to give visitors an incentive to spend the night at a hotel in Jordan.

At the Petra ticket office, we requested a guide, and lucked into the wonderful Mahmoud Twaisi, Email: ekpetra@yahoo.com, for three and a half hours. He was so knowledgeable and clear-spoken. In summers, he works for Brown University’s excavation project at Petra. He also owns a souvenir shop near the souk with great prices.

“It was such a delight when Mahmoud pulled us against the siq walls wall and said dramatically, ‘Now we are going back in time 2000 years. Now, take seven steps together, and turn your head.’ We did, and there stood our first glimpse of the Treasury. It lived up totally to all my expectations,” Lucia wrote. “It also began my introduction to a whole other aspect of Petra that one one had described to me — the lives of the local Bedu and their animals that create an open-air circus in Petra.

“While some of them can be annoying in their pestering persistance to make money off you in new and creative ways, they have wonderful animals, many in brilliant garb. The camels are brightly clothed and run in pairs or trios with bells jangling. Camels, donkeys and horses seem like cars to the Bedu — they ride them with such ease and lifelong familiarity. As they gallop their carriages up and down the narrow corridors, pedestrians press themselves close to the walls as the clatter approaches.

“Some of the men reminded me of Jack Sparrow from Pirates of the Caribbean and looked like they might use eyeliner. Very handsome. Sweet dogs abound, too.

“We stopped at a spice seller where I bought frankincense and myrrh for Alex to burn. We stopped at a coffee shop that sold fabric from the Queen Noor Foundation.”

Mahmoud introduced us to a friend who called himself ‘Gold-toothed Mohammed’, who promised to reserve donkeys for us –after lunch — for the journey up 800-plus steps to the monastery. We first wandered through a desiccated museum of jewelry, weapons, and pottery found onsite and ate a buffet lunch, as hawk-eyed Mohammed tracked our whereabouts and surfaced periodically (to be sure of getting paid by his new customers). The museum was in a shambles, and we were pleased to learn that the Japanese have donated money for a new $7 million museum to open in 2016.

It turned out that “gold-toothed Mohammed” wasn’t actually leading us up the narrow mountain by donkey, but was leaving that task to his teenage son who spoke very limited English and seemed nervous with the full responsibility of preventing tourists from falling off the donkeys and cracking their heads on rocks. “Move to middle,” he kept screaming to me, but I didn’t know whether he meant the middle of the path, the middle of the saddle that kept sliding sideways, or the middle of the donkey. When I asked for a clarification, he couldn’t explain.

Lucia found her “wee donkey, climbing up 800-plus, winding, narrow stairs (to be) c-r-a-z-y, terrifying. The donkey wanted to linger on the edge, overlooking the stones and stairs below. Was I insane to think I could sit on a donkey mounting steep, stone stairs? My heart was pounding and my blood ran chill.” There was discussion of Lucia removing herself from the donkey, but she persevered and made it to the top. 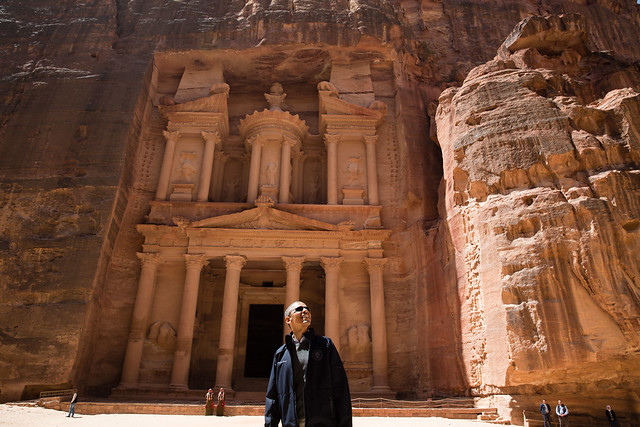 President Barack Obama views the area near the Treasury during a walking tour of the ancient city of Petra in Jordan, March 23, 2013. (Official White House Photo by Pete Souza) 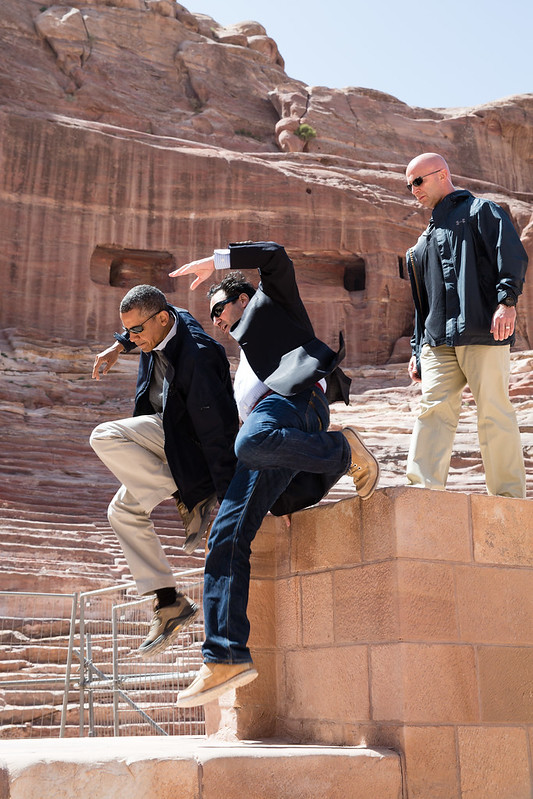 President Obama and Dr. Suleiman A.D. Al Farajat, a University of Jordan tourism professor, jump from a ledge of the Nabataean Amphitheater during a walking tour of the ancient city of Petra in Jordan, March 23, 2013. (Official White House Photo by Pete Souza) 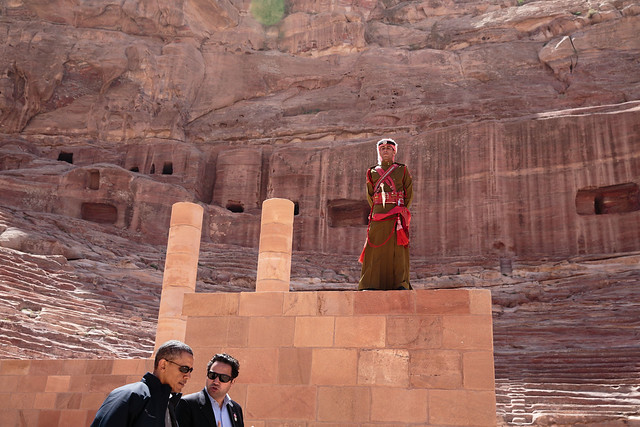 A Jordanian soldier stands watch from a portion of the Nabataean Amphitheater as President Obama and Dr. Suleiman A.D. Al Farajat, a University of Jordan tourism professor, walk through the ancient city of Petra in Jordan, March 23, 2013. (Official White House Photo by Pete Souza) 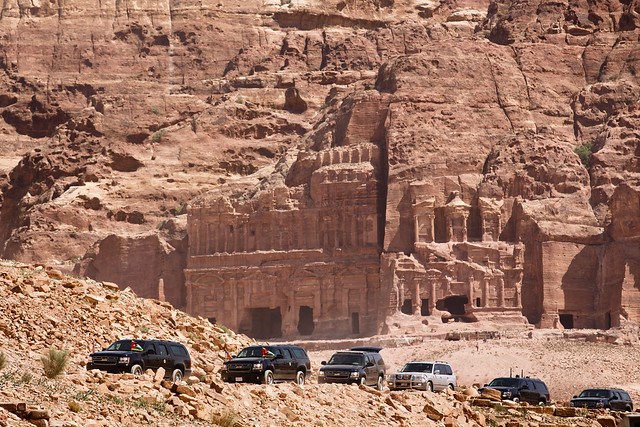 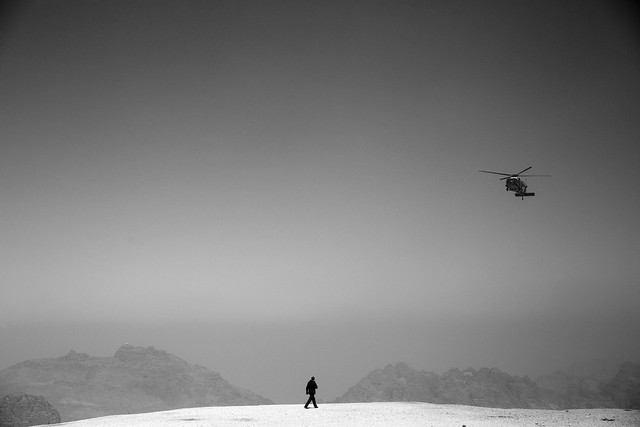 One thought on “Petra: More Spectacular Than Grand Canyon”